This morning I took the number 9 tram from our apartment and over the city bridge to find a nursery where I could buy a few herbs or some plants to put in our window box.

The store was small and was a hybrid florist/garden supply/home decor place. Outside on the street there were lovely autumn arrangements in fall colors, some perennials I recognized, others that were completely foreign.

I browsed, poking my hand underneath larger plants to locate the scrawny herbs that were hiding there as if they were unsure of their status. Most looked homely and bedraggled after their tiring tenure in the summer sun.

The chives were mostly brown stalks and the mint was woody-looking with its crispy blossoms stubbornly clinging on. The lavender was hunching down self-protectively and offering up no purple blossoms at all.

But when I think herbs I think strong, resilient, hardy. Well maybe not Swiss winter hardy. The only reason I thought plants might survive on our porch was because I had spied my neighbor right below us with an herb garden.

At the cash register the owner spoke in Swiss German with a few English words thrown in, but it didn’t matter – I got the meaning loud and clear – she was shaking her head with a dour expression (one I see here frequently). She was skeptical that I should purchase what I had chosen.

She questioned me: Where do you live? (did she mean do I have a greenhouse?) I fumbled around with the word apartment and porch which led to North Carolina which got me to living in Bern 2 years, on and on, on and on, oh brother.

I felt myself wilting under her strong gaze. I considered silently dragging my little shopping cart out of there and forgetting the whole deal.

But I finally stopped talking and just used my universal puppy look – a direct gaze that says don’t hit me I’m really easy to like. And I just listened. And it was then I realized that she didn’t want to tell me how to keep my plants alive at all, she wanted to talk politics, of all things.

With a rueful smile she went on to say how horrible things were in my country. How crazy that man is, she said. She shook her head and for the first time our eyes actually met. I felt her genuine sadness and pity towards me. She ended up only charging me full price on one of my 5 plants.

But her final solemn comment to me was that the situation in the U.S. was scary to her and not just for herself as a Swiss person, she said, but to everyone. To the entire world.

As I left the store and headed back to the tram stop I was teary with a strange sense of release. Maybe it was because in that small interaction I felt fully known – not just as an ugly American – but as a citizen of the world. I was two things.

Me with my little handcart and strange coins in my pocket wandering around the city – I would never be able to hide my huge, threatening citizenship as an American.

I hated that feeling.

And I thought about how after the garden shop lady lectured me about my government, she gently wrapped each of the clay pots in layers of newspaper and taped them carefully so I wouldn’t crush them in my little cart.

It was a small act but it made everything better.

The guttural words, the gruff talk, the guarded looks, all of that felt softened, easier. I felt pillowed in goodwill as she and her employee sincerely encouraged me to have a good day, using that essential American phrase you never hear in Switzerland.

Back at home I gently extracted the herbs from their protected nests and propped them against the window in the sunshine. I could almost feel them trembling in the paper with dread or just anticipation of the next thing to come.

The election in America is everywhere in the international news, it is huge. And for me, I sit and wait over here for the drama to abate. Encased in a self-protective bubble away from the major tremors of an earthquake about to happen, I imagine myself free of responsibility, even free of my own identity.

But I can never be.

I am tender, exposed nearly to the root. I simply want to find a warm spot that will allow me enough sun to get me through the Swiss winter ahead. 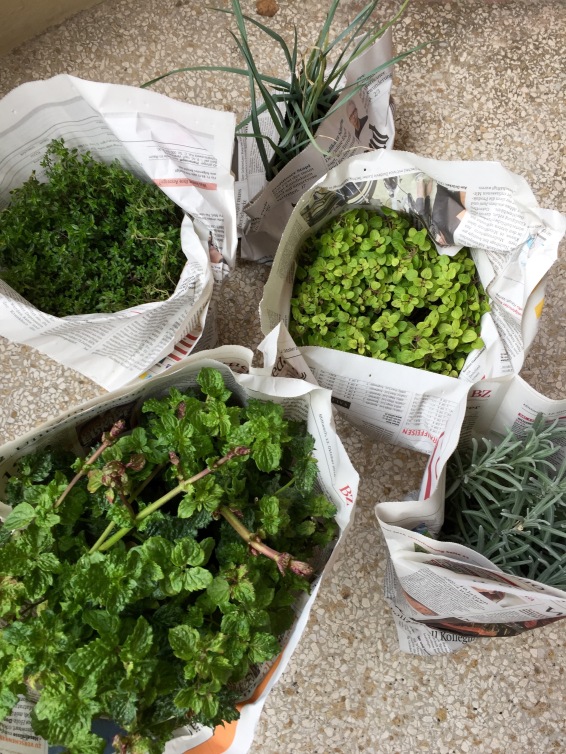