Whistling Past The Graveyard

None of us wants to contemplate our own death. We’re not really encouraged to. We live in a culture that denies mortality, one that worships youth.

We’d rather side-step the fact that eventually we will go down into the dark grave. Most of us don’t make a plan for end-of-life care or have meaningful conversation with our families about it.

We have a deep-seated aversion to death. Partly because it tends to rub elbows with two of our favorite emotions – regret and remorse. We know we need to sort out those two bad boys too, but we’d rather not. Instead we deny.

When I was in high school I was in Edgar Lee Master’s play Spoon River Anthology. The entire show was set in a graveyard and our small cast of half a dozen played the dead and buried townspeople who stood over their graves in the fictional town of Spoon River. Kind of like Our Town but a bit darker.

Each actor took turns channeling several different characters, each of whom had something burning inside of them that they felt compelled to come back and pass on to the living.

They gave poetic monologues about their lives, delivering them like little epithets. Some were angry and bitter, some were sad, a few were actually content with the lives they had led. But each had very pointed advice.

Turns out that each one, the rich and prosperous along with the wives, the criminals, the poets and the mill workers, even the outcasts who had fled the town, each had come to rest under the big old oak trees. And just about every one of them shared a common emotion. 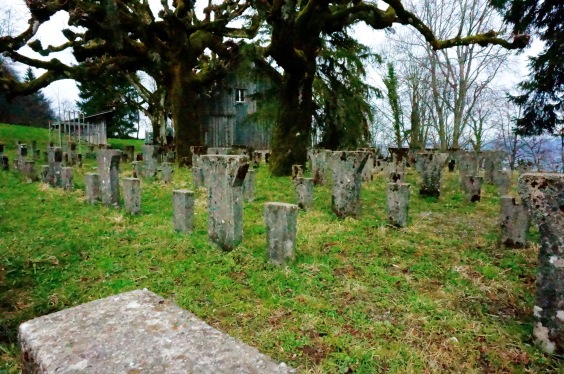 Nowadays we like to say we aim to live our lives with no regrets. But show me a person with no regrets and I’ll show you someone who isn’t looking underneath the stones at their feet.

Recently I read in the New York Times about something called the Stanford Letter Writing Project. It began at the university as a research project designed to study palliative care. Part of the study involved surveying terminally ill people and having them do a kind of “life review.” And they found that many of their answers shared a common thread.

This information made the researchers a bit uneasy. Over and over their subjects revealed personal things to them that they had never shared with anyone else, not even to their own families.

So the research team designed a letter that could be filled out and then given to the subject’s friends and family as a way for them to finally do that. A questionnaire that allowed them to unpack the things they needed to say.

And now the project has expanded to include a template for younger people – healthy people – or for anyone who might see the the benefit of doing a life review (see website below).

I visualize this exercise as a second chance not just for the elderly, but for anyone, an invitation to take our shoes off and rest under the oak tree in the graveyard. Not like writing an obituary, more like penning a love letter to the present, a missive addressed to the living.

In terms of regret, I have my share, most from way back. They generally involve times that I was mean, small cruelties that stick with me and still shame.

I also regret not talking to my mom the week before she died. I was in Croatia with my family and I guess I just didn’t realize how quickly the cancer was taking her. I wish I could have had one more conversation to tell her I missed, even just to chat about General Hospital. I wish I had pushed harder to do that.

And many times I’ve been afraid to be honest with my kids because I felt nervous or awkward. But they were missed chances all the same.

Our scripts here on Earth are brief and we have to squeeze the meaning and nuance from each act, every line, even in the asides and the throwaway ones. The play is the thing.

Now when I think back on high school, it seems like an odd choice to have 16-year-olds playing those elderly, decaying old souls. Wouldn’t seasoned actors have been better?

But for us kids it felt like the most natural thing in the world. We understood enough about regret to want no part of it.

In Spoon River my character Lucinda Matlock was one of the few in town who had a lived a full, contented life:

At ninety six I had lived enough,

And passed to a sweet repose.

What is this I hear of sorrow and and weariness,

Anger and discontent and drooping hopes?

Life is too strong for you-

It takes life to love life.

All these years later and still her words come back in my memory like a whisper, a prompt, for me to stop pretending that I have forever.

To stop waiting until my memory is shot and I’ve forgotten what the juice is like dripping off of the soft peach. That I must catch the sweetness now, and the tang too, and savor it. Taste it and be grateful.

I should quit trying to be right and settle the grudge and say I forgive you.

I should own up to something I regret that I did or didn’t do and say I’m sorry.

I should stop feeling guilty and say I wish I had been present when you needed me.

I shouldn’t be embarrassed to pull my kids aside and say I’m so proud of you because I am.

I should say I love you even though I assume they know it anyway.

I should simply say thank you even when gratitude isn’t easy.

But I should do this now while the time is still ripe, while the memory is fresh and I am too.

If you’re like me it’s not an easy thing, it’s scary to go into the graveyard. It’s much easier to avert my eyes and step briskly on by.

But if I do that I’m afraid I might miss out on the everyday drama around me, the suspense and thrills of Act 1 and Act II on the way to the final curtain. And I don’t want to miss any conversations with the audience of the living – with the ones in my life I love most.

So today I want to sit under the old trees of the graveyard and play out my part, the easy and the painfully difficult – and even to find a scrap of recompense if I can – in the here and now on my stage, this little stone, while I still can.

5 thoughts on “Whistling Past The Graveyard”