My Canton ‘Tis of Thee 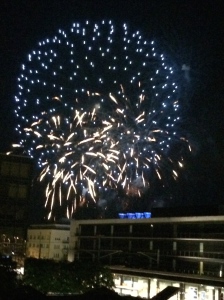 Friday is Swiss National Day. I’m so proud that I know this fact and that come Friday night I won’t be scared out of my wits when some loud and overwhelmingly spectacular thing happens.

Last month I had been enjoying a quiet afternoon until all of a sudden there was an ear-splitting noise as eight fighter jets streaked across the sky doing flybys, and executing suicidal type activities right in front of me as I ate lunch on the porch.

It was pretty horrifying. I mean, war could have broken out for all I knew. Except for the fact that this is Switzerland.

And one Saturday in June we stumbled upon the annual summer Chriesitag festival in Old Town. It had a popular cherry-pit-spitting competition complete with measuring sticks and official judges. I tried to get Mac to enter but after seeing the trajectory of the expulsions he didn’t stand a chance. I mean watermelon seeds are a whole different ball game. I think guys were greasing them up with some questionable substance.

And it was clear that these competitors had held titles in their divisions for years.

By surprise, another night we experienced the most elaborate fireworks show I have ever seen in my entire life or since Columbus, Ohio at least. One full hour and over a million dollars spent. I have no idea what that commemorated.

Naturally it’s hard to discern what’s happening locally because all of the promotional stuff is German. This sounds like whining, but you try it. You spend all afternoon translating an outdoor movie series poster, double checking that the film is truly in English, and then come to find out the stupid festival is in Lucerne.

Anyway, this week the stores are full of high TNT canons and firecrackers and Swiss flags and tons of red stuff. So something is up, and once I get my sparklers today I’ll be all set. I just hope my passport and temporary visa card will be enough ID for the transaction. Because I’m ready to be a very patriotic Swiss Ms.

I’m reading a book about Switzerland that I wish I had read before we got here. It’s titled Swiss Watching: Inside The Land of Milk And Honey, by Diccon Bewes. He’s a Brit, and he approaches the subject less like a travel writer and more as someone cracking a code. It’s a fact-filled, funny look at this tiny country with all of its unique quirks and idiosyncrasies.

And I appreciate that he confirms some of my early impressions – this place is an enigmatic nut to crack. But utterly fascinating as well.

Swiss history is pretty complicated. In fact, everything here is complicated – the government, the civic infrastructure, the way the shopping is done.

So I’ll just start with this holiday, the birth of the Swiss confederation in 1291. Yes, I said twelve ninety-one. On August 1st of that year, three men sat down in a meadow in the middle of nowhere (okay Rütli) and swore an oath of allegiance. The actual document is a tattered trail map looking thing with one of the guy’s signature torn off.

Most citizens don’t even know these fellow’s names and not much was recorded about what actually transpired, but that’s the official day. And the exact spot isn’t even identified with a big monument or anything. That’s how practical these people are.

But one of the coolest things is how they commemorated their 700th anniversary with the building of the Swiss Path. It is a 35 km trail around Lake Uri with every five millimetres representing a single citizen. Very precise, very Swiss.

Mr. Bewes points out how perfect this path is because it combines Switzerland’s two great national pastimes – walking and attention to detail. The layout is fairly intricate –  each of the 26 cantons (like provinces but autonomous) has its own section of the path with the length determined by its population. It is a painstakingly accurate timeline of significant events in history and when each canton joined the confederation.

The journey starts at the meadow where the treaty was forged and proceeds chronologically with information displayed along the way. You can even stop and see the founding buddies’ document in Schwyz. It’s a literal walk through your place in Swiss history.

I think it’s an amazing achievement. And it illustrates the Swiss’s single-minded dedication to a good idea. Not every country could undertake such a task.

Enough about that and back to the party. Who knows what will be expected of us?  I have a national team football jersey and scarf, would that be appropriate? Do we gather at the lake to grill food? Does it start at dusk? I hope it’s not too late since my bedtime is pretty early.

One thing is for certain, if we are in bed we will definitely hear it because the train station is the busiest, rowdiest, most raucous place in town. Even though it’s small town Zug, I’ve witnessed some hair-raising scenes that have made me grateful that I don’t know Street Swiss German.

So think of us on Friday, incognito Americans wearing red and white and waving the square Red Cross flag. And trying not to talk to people about our Declaration of Independence or the Lincoln Memorial or anything like that. I wouldn’t be that arrogant. I’m really not a very patriotic American in the celebrating kind of way.

And besides I’ve never even been to Mt. Rushmore.