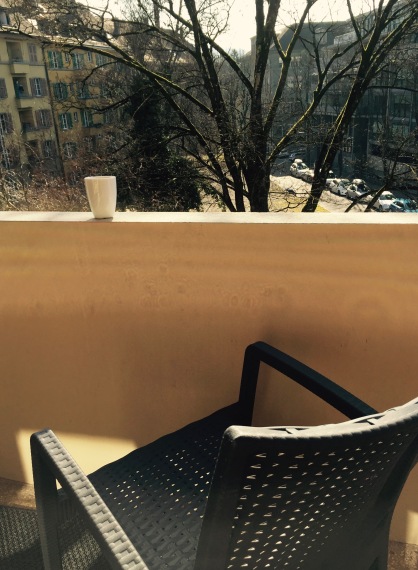 It’s the first day that it’s been mild enough to sit out on our little balcony, so I fix a cup of tea and cradle it to my chest to feel the warmth because it’s still only 50 degrees or so here in Bern.

For over a week I’ve had a virus that has been slow to vacate my body. I haven’t felt inspired to write but today I’m starting to feel better.

It’s been quiet in this tiny apartment and especially inside of my plugged-up head. My sluggish brain has definitely not been a very fertile terrarium for nurturing any creative flow.

Even when I’m well, being alone in a foreign city involves a ton of roadblocks and barriers. At times I carry around a backpack that totes an emptiness which, for a writer, is not a great thing.

And not knowing the clunky Swiss-German, this city can be a blurry scrim.

But because all writers live and breathe words, I unconsciously inhale the grotesque strings of dotted vowels and crazily compressed consonants that are scrawled on every surface – on the store fronts, on the sides of the train, on all of the street signs, even on the graffiti.

And  I really wish I could read that crap.

The Swiss are obsessively clean and orderly, but I’ve read that they have the most graffiti of any country in the world. And the cities pretty much leave it alone. It’s an odd sight: medieval buildings with rebellious fluorescent scrawl all over them.

My theory is that, in a communal society that is so well run and efficient there’s gotta be an outlet for crazy, for spontaneity and individual expression.

Being sick (being alone, depressed, discouraged or whatever) you get a little lazy, even lethargic, jaded. I spend a lot of time reading junk on the internet. But as everyone knows that can be a poison cup.

The endless news feeds, tweets, opinion pieces, the well-meaning advice, even positive words of encouragement –  I schnarf it all down. Like junk food, the stuff is easy to binge on. I need the sustenance but then I end up feeling oversatiated and numb.

And day after day the words eventually start feeling dead and I sure as hell don’t want to add to them. And then every 12 hours they  wash away, most of them never really sticking to my insides. I’m immune.

So I go back to creating. I make some tea, wrap up in a blanket and sit on the cramped balcony and hug my legs into my body. And I feel the sun on my face and I wait.

And I listen. And I try to hear, not just what’s going on outside in the yard (I’ve been studying those kids for days), but what’s inside, what’s knocking around underneath my breastbone.

Yes, we all are writers. And with scores of prolific voices scrolling across the internet, it’s easy to take the crafting of words for granted. It seems simple, the words spilling out eloquently and succinctly. And yet always they are disposable.

But writing is art. It’s sometimes hard and frustrating. And it’s a weird mashup of what’s dancing around inside me and some mysterious sprite that comes and goes on a whim.

But when I succeed in catching that elusive thing, then I relish the reward for toughing it out, for walking alone on those cobblestones, for questioning the tiny moments and for looking so hard at the details.

But it’s a lonely thing.

I recently read an article about the Expressionist Environmental artist Christo. He and his wife are the crazy people who wrap stuff, most famously prominent outdoor expanses.

Using bright fabric and other everyday items, he installs his vision on a massive scale across provocative landscapes.

He wrapped 2.5 km of coastline in Australia and created a fabric tunnel across the Pont-Neuf bridge in Paris.

In Basel, Switzerland he wrapped 178 trees in the city park. And it was reported that they billowed and undulated in the wind and that the transparent material highlighted the individual trees as they languidly danced against the sky.

By wrapping these immense, ordinary seeming vistas, he breaks them apart, articulates them and helps us look and really see.

And then they are gone.

A break from the internet? Yes, it’s a good way to counter the infinite bolts of negative space. But I don’t confuse withdrawing and insulating myself as an escape from reality.

I think it helps me see the tree.

Like with Christo, maybe the wrapper is the thing: pick out from the rag pile and see where it might work, weave some color up and around the overwhelming expanse of sameness.

It’s nothing profound – it’s the same backdrop for all of us. But I tell myself, so what, wrap it up as your own and then let it go.

I’ve missed my writing – the tension of it and then the release – my own spray can of letters and symbols on the sidewalk, my own hurled banner of blood-red cloth like Christo’s (who is reportedly set to wrap up Trump’s wall).

Divisiveness, alienation, fear. We’re all looking at a world that’s gone numb and maybe we aren’t able to see a way forward.

A one-line poem or a graceful yoga asana.

A tiny knit and purl in a fuzzy pink hat with crooked kitty ears.

A raggedy street busker who keeps the city alive with a cloying accordian.

A handmade papercut card of encouragement from back home.

A stunning video of my boy who carves his own trail on the side of a mountain in a short ski season.

Two people preparing to say I love you and imagining a future together. Imagine that!

Crafting the everyday into something more.

It’s that energy that’s mustered up from disconnectedness and joy, homesickness, depression, fever, manic humor, even a crazy sense of patriotism, whatever – all the ragtag scraps fluttering around in a brain that I might eventually articulate.

And like the thin sun on bare legs, it’s not gonna last, the cold is still deeply embedded in this long Swiss season. The art of all of it is temporary and no one will even see it.

But that’s why I pay attention. To spot the little signs. They’re chalk lines on the sidewalks of the revolution.🚩

3 thoughts on “Wrapping It Up”