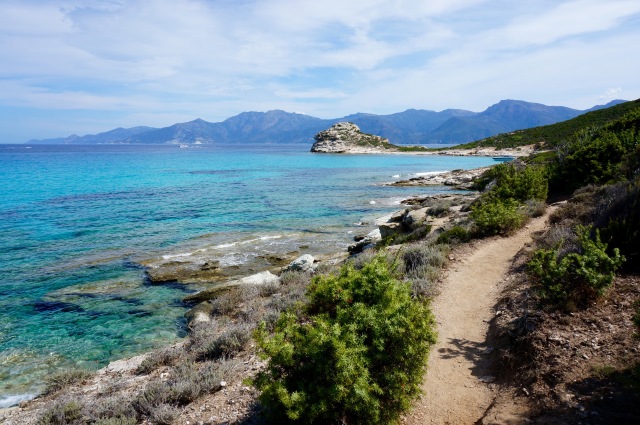 Everything’s changed since we’ve been gone.

The other night when I was lying in the tub, I tried to take it all in. I slipped down deep and let the water creep up behind my neck as I peered out across the calm, still surface, gazing at a sort of imaginary horizon near my toes. Like I’d done in all of the bathtubs in the hotels and apartments we’d stayed in this year, I was looking to find the equilibrium and to acclimate myself to the new space.

But now I was finally home and even though I felt the familiar heartbeat of the house – the clock chiming, the squirrels scratching across the roof, the school bus in the morning, so many things felt slightly off and different. And it was tricky stepping back into the exact cadence of my daily routine: the trash/recycling schedule, where to buy groceries since they built a new store, the little mechanical tasks that I thought would come back automatically but didn’t.

Yet what felt natural and easy was being back with my cat Oliver, and I instinctively remembered his quirky needs, his habits, the little ways he set the metronome for our family life. His huge personality and presence now filled up the space inside of me that had been missing him.

He was what made home feel like home, he was my touchstone. But now everything had changed with him too – he was downstairs on the kitchen counter, curled up under the lights and trying to stay warm – and I knew he was going to leave us soon, to go for good, because his little body was slowly dying.

The next day at the emergency animal clinic, I didn’t know the vet but when her kind eyes met mine, I read exactly what was written there. But I just couldn’t allow her words to penetrate me: cancer, late stage disease and fluid in the abdomen. Those cold, terrible words that could never describe any cat that I knew –  because Oliver, my sweet boy, was robust and fluffy and so smart and bright-eyed that he had even caught a bird just last week.

But he had looked pretty thin when we got out of the cab from the airport. He’d pranced right over when we pulled into the driveway, but when I scooped him up and buried my head in his snow-white belly, I could feel his spine beneath my splayed fingers. And I’d looked into his beautiful blue eyes and it hit me for the first time that he seemed elderly and I saw he had a tiny tremor.

One year and a half in Switzerland and everything’s changed.

The school children and their parents still walk past on the sidewalk but I don’t recognize any of them. There are neighbors on our street who are unfamiliar and they pass me in their shiny hybrids and their stupid looking bike/car vehicles, with blank stares, looking through me as I search their faces for something, anything I can grab onto to realign myself.

They are strangers and I am a stranger here too.

So much has changed in the house, it seems to belong to someone else. Someone had used a different shampoo in the shower and someone else left a belly ring between the couch cushions. Some young person had shucked his socks and size ten Vans by the door, and someone else forgot her Carnival Cruise Bahamas mug in the dish rack.

And please, whoever left the banana bread flavored craft beers in the fridge, come back and get them, they’re really bad.

And outside in the yard, a few of our meticulously planted shrubs are brown or dead.  And the new vines we planted – wisteria and confederate jasmine – have strangled the trellis, and curled their way up two stories, to our bedroom window, like they were coming to find out where we’d gone.

But someone has also strung tiny lights through those vines, so we can sit on the deck in a fairyland twinkle. And someone has put a miniature REI tent on the kitchen floor for Oliver. And there is a lovingly crafted herb garden complete with stepping-stones out by the compost pile. Rosemary for remembrance.

Someone has lived here and gone, and now it is me who is the stranger to this house.

And they tell me Oliver was employed as the gracious concierge, ushering in each new tenant and guest. And like a seasoned hospitality professional, he’d spent many late nights after hours, listening to them, consoling and commiserating, as they drank beer and smoked cigarettes out in the yard. He’d cuddled with them and even gone inside their silly tent after getting him hopped -up on catnip. But he’d humored them because that’s what the kindly manager did, it was part of the job.

But on Saturday we brought his body home and buried him in the yard that was his grand hotel, and we lit a candle in the rain. And each evening it has burned all night, illuminating those hours when he used to survey his grounds, the hours I used to worry about him a little.

And during the day, as I move through the Oliver routines in my mind (in/ food/nap on bed/ out/ in/ nap in laundry basket/ out/ in/ more food/ nap on coats fallen in closet,etc.) I look out the window and see the candle and it feels like he’s still here.

Before the vet administered the sedative overdose to him, I gently eased him onto the clinic’s couch to nuzzle him and say goodbye and thank him for being such a wonderful boy for the past fifteen years.

And I knew that he wanted me to pick him up and simply lug him home. He saw the cat carrier at the end of the couch and he tried to move into it, but then hesitated and seemed to be considering the situation. He knew that it wasn’t his favorite box, but nevertheless, it had never failed to transport him back home.

But this time he seemed to think better of it and simply laid down and curled under my arm. He was resting and waiting, just waiting patiently for us to take him where he was supposed to go – he had always been so trusting, so smart, so intuitive.

I believe that most of us want to travel and explore and have outrageous amounts of fun, but that we also hold on to a safe place in our mind, where time stops, where our family stays the same, and where we are loved and understood and uniquely remembered.

Where we are singularly known and never a stranger.

And as I held my cat I thought about all the places I’d visited recently, and all of the airports and trains, the exciting foreign cities and all of the interesting people. And how, now that I was finally home and had reached my desired destination, it felt completely sterile. Like I was just another individual among so many, letting go of a pet with a standard, single-use syringe.

And I finally got it, that I wasn’t home at all, and I never would be. I would never actually get to where I imagined I was headed. I’d always be in a perpetual transit mode, moving from place to place, as sure as those Swiss trains kept on their schedules, and I’d always be essentially dependent on the assistance of people I didn’t even know.

And despite the fact that travel has helped me get better at handling it, the truth is, it’s unsettling and uncomfortable to be suspended in this way. To be at a place that’s not the beginning nor the end, but somewhere en route, in between, a full space between breaths, on automatic pause, just waiting.

It’s been a huge comfort to have Oliver’s body at home, out back where I visit his little grave and imagine him crouching beneath the bird feeder, or coming out from under the porch all sleepy-headed with leaves sticking out all over him. And I think of his plush, toy animal fur and how it seemed to be from some otherworldly manufacturer, so unreal in its black and white fluffiness.

So yesterday I felt ready to return the unopened cartons of cat food to the farm supply store down the street. But as I heaved the cans up onto the counter the air went out of my chest and I felt like I couldn’t breathe.

Fifteen years I’d been buying that high-end stuff in that store because Oliver wouldn’t touch anything else. Fifteen years of chatting with the tattooed, pig-tailed red-headed girl at the register, and on some level maybe my body sensed that it could release because I started to cry really hard and I couldn’t stop.

The sweet, barn-like smell of the place had me reeling – the mountains of feed and seed bags piled everywhere, nutritious food that was stocked to keep other people’s’ kittens and puppies, horses, chickens and birds alive –  but not for us, not for my cat, not for him anymore.

Oh sweetie, red-head said, and then she waited calmly while I hiccupped and tried to explain, but I couldn’t reel myself back in so I just dumped the box while she quickly handed me the money. And bumbling out of the store, getting back in the car, I looked at the receipt in my hand and at the bottom was scrawled I’m so sorry  – Christine.

All these years I’d never known her name, and yet she was the one I wanted to cry to, the one who could give me what I needed, a space to grieve. I never said a coherent sentence, but she knew the whole story of Oliver and me.

And today, as I close my eyes, I think back to our trip to Corsica that seems like a lifetime ago. And I remember leaning over the side of the small boat and staring down into the ocean. The color was a brilliant mixture of blue and turquoise and green, an aqua hue I don’t have the words for.

And I’m remembering Oliver’s eyes and how their color was so similar to that Mediterranean, how they were like cut jewels, set deep inside of perfect marbles. And when I stared into them, the light that came through the blue was from a place beneath and beyond anything human-made.

As well as I knew him, he was always a mystery.

And I remember how, on that sparkling Corsican day, the ocean was so deceptively clear that I thought I could put my arm down beneath the surface and touch the pink coral near the sandy bottom. But our new friend Antony, the bearded man from the town of Oletta, told me that the shallowness was just an illusion, it was a trick of the eye and that the water was really quite deep in that spot.

And I wish I was back on that boat, released from worry and grief, where I could feel the wind and the sharp slap of the choppy waves that caused me to lose my balance, and where, even though it was somewhat disorienting, I could somehow reach the sandy bottom of that blue-green tranquility.  And there was a silence and a peace down there beneath me, and I knew that I could touch it, even though it went deeper than I could even imagine.

7 thoughts on “Kindness Of Strangers”