The Ones We Leave Behind

They are the perfect family members. They never fail to show up, greeting us at the door, no matter what kind of day they’ve had. They accept what we have to offer and rarely complain, even if they disagree. They sense when our emotions are out of whack and never fail to come to our side to be our talisman against all evil things.

They look at us with eyes that speak, if we take the time to look into them. They absorb the energy of the room and respond accordingly and, most of the time, appropriately. They are endlessly patient and make tireless efforts to connect, beyond the lengths any human being ever would. They seek only what is simple – a scratch behind the ear, a bowl of something crunchy, a warm foot to curl against on chilly December nights.

Mostly, they just don’t want to be left out in the cold.

They are the original yoga masters. They remind us, quite simply, to be in our own bodies. They teach us to be authentic: to stretch and nap when we need to, and to pounce and be aggressive when necessary. To roll lazily in warm leaves in the Fall, and frisk and play when a favorite toy is tickled against our cheek.

And they always stand their ground and protect their little spot on the couch, because loyalty and conviction seems to be bred in their genes.

Our pets exhibit the whole range of motion/emotion during their day and then usually curl up pretty satisfied at the end of them.  And living in a home with them all day, day in and day out, allows us to enter into their rhythmic, clockwork cycles of Zen. Wake cheerfully, eat. play, give and receive attention, sleep some more and repeat.

And when I pet my dog and cats, my pulse quiets and my breathing slows. Their touch tells me to slow down and look at them and to just be myself, the person they know and rely upon.

They want me to play when it’s time to stop taking the world so seriously.

And when I gaze into the prism of their otherworldly eyes, I see something so deep, so mysterious, something even eternal in them, I see some kind of pure soul. And in those moments my heart shifts and I feel connected and whole.

My Oliver is friends with the entire neighborhood. Every day, when grade school lets out, he waits on the sidewalk in front of the house, for the children to walk by and adore him. And one little girl sits on our steps for a long time, with her mom, just checking in with him, holding his big fluffy body and scratching his fat belly. If he doesn’t show up, they worry, they come to the door and inquire.

I don’t even know the family’s name, Oliver travels in social circles I’m not a part of.

Recently our son was coming in late at night with a friend, and he was fumbling at the front door with the keys. A neighbor walking by was suspicious and called out: Who are you? Do you live here? And Lewis assured him, yes, he did. And then the man pressed: Then what’s the name of your cat? Oliver, my son assured him with the correct password.

Because everyone knows it’s Oliver’s house and we’re all just living in it.

Even the dog walkers stop so Oliver can touch noses with the big terriers and shepherds. He’s not afraid, he grew up with dogs.

But a few weeks ago, my sweet boy Oliver became very sick. And I felt like I’d let him down him by not being there. He was crouched in the back yard, behind the compost bin, unable to drink, lethargic, not moving.

I feel sick with guilt just picturing him. When I was a stay at home mom, I was the point person for all the living animals under my roof. If nothing else, I provided the seamless, unflagging presence of a stationary body that everyone circled around, coming back to for balance. I was sustenance, shelter and succor – I was essential. I was irreplaceable.

Or so I believed.

But there will come a time when we will leave. And our animal friends will feel that loss at a cellular level, in a way more physical than even our children. They will eat and drink and sometimes play with other caretakers, but is it enough?

I believe that being a pet owner means that you are signing on for the hyper-vigilant role. Because our pets can’t always voice their needs, we are entrusted to translate and advocate. Knowing that when we’re not physically present to execute that duty, we’re ignoring the critical part of the contract, stretching our good- faith agreement.

All of this is to ask you to please hold a good thought for my Ollie. That he’ll hang tight to his 80-plus years of tenacious life until I return. That he’ll somehow intuit that I’m really coming back home to let him in the back door.

And that when I do, I’ll give him the beef and never the fish flavored food. And I’ll pull his tail playfully and hold him like a newborn, just the way he likes. I’ll sprinkle catnip like it’s a kitty rave. I’ll let him nap under the bird feeder. And I won’t even scold him when he eats the plump, tasty koi from the pond.

Because I realize our roles are reversed right now – he is the one keeping the screen door ajar for me while I’m out wandering the world. Now he’s like the patient, responsible parent trying to understand behavior that isn’t really acceptable.

And I’m hoping that his feline patience hasn’t wavered, that he’s still bright and steady-eyed enough to remember me. And forgive me. And let me pull him close, and bite his ear, and hold him and love him for far longer than he really prefers. Because even though he’s a cat – he’s a special cat – he’s Oliver – Oliver Kendall of the Kendall House.

He’s family. And family is something we can never leave behind. 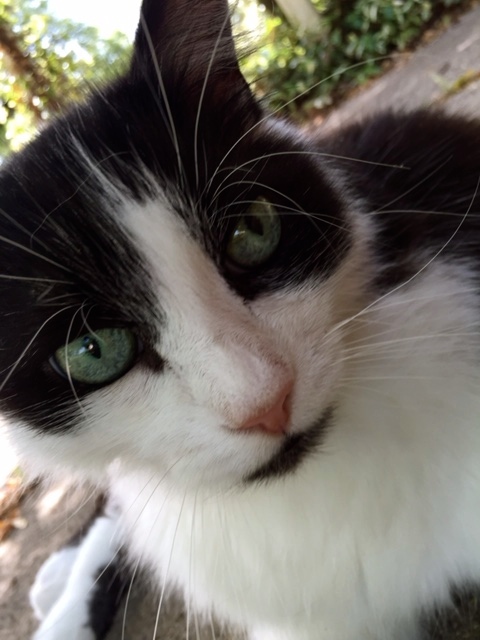 5 thoughts on “The Ones We Leave Behind”

Leave a Reply to elk in switzerland Cancel reply