The Patron Saint Of Lost Things 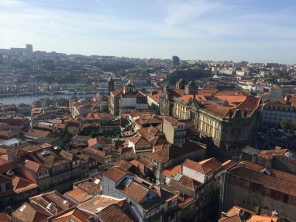 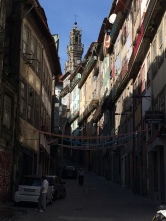 In my old griefs, and with my childhood’s faith
I love thee with a love I seemed to lose
With my lost saints. I love thee with the breath,
Smiles, tears, of all my life; and, if God choose,
I shall but love thee better after death.
–  Elizabeth Barrett Browning, “Sonnets From The Portuguese”

Portugal has a feeling of loss about it.

The colorful mosaic tiles on the ancient building facades in Porto and Lisbon are crumbling a little, and the gracefully, scrolled, iron balustrades are rusty from salt air. The cobbled streets are littered, and things seem a bit worn out. But the brightly painted cable cars still run, and the cities feel surprisingly vibrant.

Economically, it is a relatively poor country that has known better times. When I spoke to a young woman there, and mentioned that I was living in Switzerland, she looked at me wistfully, and said “the Swiss are so very rich – not like us,” I felt sorry.

The Portuguese seem familiar with grief and misfortune, through the years they’ve known it well. Their famous navigational and fishing heritage is one of hardship, risk and even tragedy, with many lives lost to the sea.

But the people here don’t seem to be letting economics get them down. The spirit of resourcefulness and invention, artistry and diligence, that reflects their roots, is very much alive here. To me, it almost feels like a small renaissance is taking place.

Even the Portuguese symbols and motifs reflect this mix of mettle and humility – the oversized filigree heart, and the arrogant bantam rooster. The legend says he saved a poor, innocent peasant from the gallows by crowing at dawn. And one of their revered national heroes is the fictional caricature Zhé Povinho, who represents the common man, fighting for the poor, against injustice and oppression.

It feels familiar for me to be among people who have experienced hardship, and to be in a country that is not a world power. Portugal is just a little smaller than the state of Indiana – but big in heart.

Being from the state of West Virginia, I can relate to this. Poor places, huge spirit. Even in just chatting with folks, I see a pluck, a spark beneath their gracious hospitality.

And here is where the word melancholy seems to have been born.

The traditional Portuguese folk music is something called Fado –  from the word meaning fate. And the theme of all Fado music is that fate, inevitably, decides our future. So we must make peace with our destiny, good and bad.

The melodies are full of dramatic emotion, very melancholy. And this is not a quaint, preserved genre from the past –  it is embraced by the youth today, as relevant now as ever.

On our trip to Porto, we climbed the stone steps to the top of the historic Torre dos Clérigos, (Tower of the Clergy), and looked out at the sun-burnished city. Terra-cotta roofs and narrow, winding streets, and out to the expanse of the Douro River, with all her colorful wooden boats, docked at the famous port cellars. And below we spotted brightly colored booths with lots of people.

Making our way over to the square, we saw that it was a bird market – thousands of exotic canaries, parakeets, cockatiels, a peacock and even a turkey, for some weird reason. We’d noticed the bird cages hanging from so many of the balconies in the city.

But after a while, I’d had enough – birds in cages always make my heart so sad. Such exquisitely painted wings were meant to spread wide and fly free to the tops of the trees – I’d much rather see them up there.

At lunchtime, we strolled on cobblestones, where restaurant owners stood outside, beckoning us to come in. Each establishment displayed large glass cases with the fresh catch of the day, atop mounds of ice. There were silvery fist-sized shrimp, oily sardines and bright red snapper with huge bulging eyes, startled forever in time (I can’t say that wasn’t a little bit sad, too.)

And inside, we were greeted as if we were members of a large, boisterous, extended family. At first it seemed that there wasn’t room, but, no trouble, the waitress squeezed us in near the kitchen, elbow-to-elbow with others, at a farm table spread with soft, white linen.

It was the middle of a work day, and yet here sat business men, mothers with strollers, students – all taking a break for a huge mid-day meal. The shops were closed up and it was time for the important things, family and food.

And after lunch, we witnessed a massive parade of young people, chanting and dancing in unison, as they filled the streets. They were first year students from the universities, celebrating a traditional rite of passage. Faces painted, they wore vivid school colors and dragged noisy strings of empty soda cans that had been painted to match. It was a real ruckus, and half the city seemed to have come out to share in the pride and excitement.

And later in the week, we took the ferry over to Lisbon, and found a city park with a large craft market. Browsing through the artist’s’ displays, I was impressed by the resourceful originality of the art.

Two young women were selling little candle kits designed to be assembled at home using recycled cooking oil. Another craftsperson had created unique items out of cork – using bark from the many acres of cork trees growing here. There were purses and jewelry, book covers and hats, all made from the soft wood.

Lost objects, lost people – anything missing, really. I smiled to myself as I heard this, it felt so fitting.

A belief in education, grassroots art and music, a loyalty to family, and a commitment to use the earth’s resources responsibly, this country seems to recognize its priorities. Portugal may be going down in the economic rankings, but to me, they seem way ahead of us when it comes to living well.

Americans vacillate around environmental issues and using renewable energy, even about our commitment to education. Many of us want change  –  but I’m not holding my breath. My money’s on Portugal, the bantam weight country that knows about hard times and loss, but continues to evolve.

Later, when we got home, I went to the dictionary to look up a word to describe the unusual ambience I felt in Lisbon and Porto. And there it was, in Portuguese:

To me, it’s a wonderfully wise word, because it conveys a sense of nostalgia that doesn’t linger on loss. It honors the past, while keeping one foot in the present.

The word saudade recognizes that emotions can embody more than one feeling – that we can simultaneously experience joy and grief mixed up together. We can know oppression and bitter reality, but still dream of things to come, and be grateful for all of it.

On one of our last days here, we took the long drive down the coast to see the famous St. Vincente lighthouse at the southernmost tip. We reached it at sunset, in time to watch the sun disappearing behind the squat, fire-plug shaped beacon.

And as dusk started to fall, I looked up and glimpsed the bright winking of its eye – the slits opening and shutting, like a lazy crocodile awakening from a nap. And soon it was near full wattage.

Then, as we drove away, I looked back and admired the beam  – the second most powerful lighthouse in Europe. And it seemed incredible that we still rely on this ancient technology to guide our vessels home.

And it occurred to me then, that the lighthouse was, for me, the most fitting icon for Portugal, this working symbol of salvation and leadership and light.

A towering tribute to exploration and risk, and to redemption in the face of inescapable human loss. And a monument to the eternal faith in the traveller returning home to safety.

With the conviction that, while poor and dangerous and even violent, this rocky shore is still a harbor – a place of saudade.

A place to be well and happy and loved, and a land where all things lost can be found.

2 thoughts on “The Patron Saint Of Lost Things”