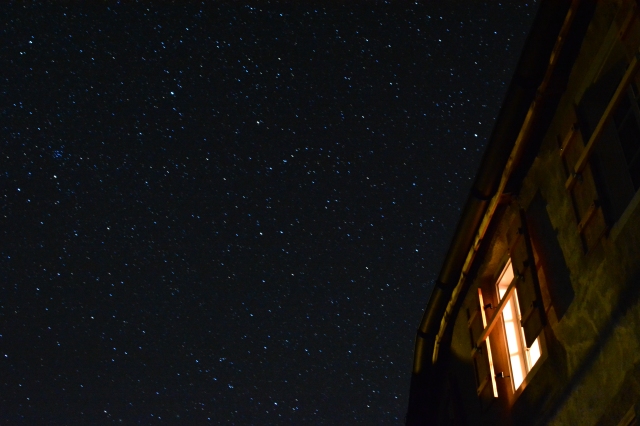 This is love:
to fly toward a secret sky,
to cause a hundred veils to fall each moment.
First, to let go of life.
In the end, to take a step without feet;
to regard this world as invisible,
and to disregard what appears to be the self.

Lewis had mentioned that the stars would be particularly magnificent tonight, if only we might be able to pry our hands off of the hot water bottles we were cradling to our chests as we lay in our narrow beds. Or, in Mac’s case, scissored between his cold legs. And then if we could manage to brave the cold floorboards and wander out into the unfamiliar darkness at our mountain altitude of nine thousand feet.

We have eaten dinner in the small, cramped dining room of the Faulhorn hut, and now the three of us have retired to our bedroom after a pretty strenuous day. No bathroom, no heat, no hot water. Just a large ceramic pitcher and basin with freezing cold water in it.

Why anyone would want to douse themselves with that, I have no idea.

I lunge for the bed with it’s fluffy, down comforter. Mac throws me an extra wool blanket. They have given us each a flannel-wrapped hot water bottle – as in the aluminum drinking kind – to put in our beds. I mean it’s frigid. Early September and it already feels like winter.

Wanna go outside when it gets dark and get some cool pictures of the stars? Lewis asks.

And after reading our books for a while, he grabs his tripod, and I yank my blanket off the bed and wrap it around my shoulders. I force open the heavy wooden plank door with my shoulder, and all at once I’m teetering, like I’m wearing heels.

The blackness above me is so much larger than the point I am standing on, I feel tipsy. It’s completely dark out here, and a cold wind whips at my face.

We round the edge of the building and step onto the rock just outside the window of our room. Carefully inching my way to a nearby bench, nearly tripping on my blanket, I note the sheer drop-off of the mountain face.

Not that I can see it, but I know it’s there, just beyond my son’s feet. And not for the first time today, I warn him to stay the hell away from the edge. He mumbles something sarcastic, just out of earshot.

He sets up the tripod on the uneven rock, and adjusts the lens of his camera. I can sense his excitement and I feel it too. The blanketing silence. It is so quiet that the air feels thick.

And above us, the vastness of the clear night sky, pinpricks with bright stars on the huge canvas of the blue-black heavens. And the Milky Way – impossible to miss, even for a novice star-gazer like me. The huge galaxy is swirled across the entire dome above us.

And it is so much larger than I ever realized.

I sit back and let my mind reflect back over the day. A full day of hiking, with one nice stop at a canteen around lunchtime. Amazingly, I was completely confident this time, with no fear of falling. But then it didn’t seem like this route was as aggressive as Mt. Pilatus, the site of the last aborted hike with my son.

But late this afternoon, after we had reached this pinnacle, we started talking. And Mac expressed how nervous he had been and how challenging the altitude was. Was it harder than Mt. Pilatus?

Apparently so, according to Lewis. How could that be? No way! That mountain was unhikable. But I was wrong, because these peaks are actually considered more challenging, more daring.

I have never been so aware of the power of the mind. I had been so freaked out on the other hike. Was it because we had hiked a long time at its base and had revered its imposing shadow all morning? We had definitely talked it up, and Mac had opted out. Did all of that play on my mind?

All I know is that Mt. Pilatus had morphed into something almost mythical, like the dragon that local legends say sleeps in the mountain’s sky-top cave. I went into the whole thing pretty terrified.

Fortunately, anxiety is one of the few mental health issues I don’t have to deal with. But let’s just say I have a new appreciation for what anxious folks struggle with. Because once the cycle of anxiety started, I couldn’t get the wheel to stop – it was out of control. A switch had been flipped so that I couldn’t talk myself back down.

And yet, here, today, in bigger mountains, with two of my guys by my side, I didn’t even hesitate. Sure, there were times on the path where I had to train my eyes from looking down, but it wasn’t a big deal. In several sections the floating mist partially obstructed the terrifying view. And I just pretended the edge of the path was right below the mist, not thousands of feet to our death.

My head was in check. The fear wasn’t bigger than my total enjoyment of the experience. Like the Rumi poem, I took a step without feet.

But back to the stars. Eventually Mac comes out to join us, not wanting to miss the spectacle, and just as we turn our heads to look at the moon glow, we both catch sight of a shooting star.

And in a sky like that, it falls, and falls and the line of light seems to go on much longer. But still it’s just a flash – like a slipped memory, and then it’s gone.

You know, it’s difficult to write about nature, or mountains, or stars, without sinking into cliché. Since ancient times, these things have been such familiar touchstones, and we have drawn endless meaning and inspiration from them.

So I don’t really have anything more to add to the conversation. Except, as I tilt my neck back and let the blackness fall around my shoulders, I think to myself: I am here, in this moment.  I am here to witness this.

Like the shooting star, everything in my life will pass, will extinguish, will die  – including me. But tonight, in Switzerland, I am touching this craggy place, this mountain top, underneath this lonely, dying star. In this solitary September night sky. This one secret sky of mine.

And for that I am forever grateful.

One thought on “Falling Star”